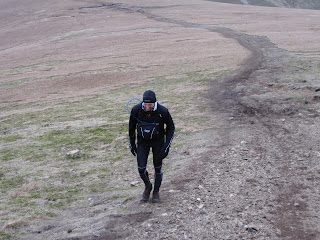 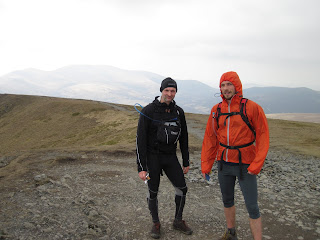 I met Paul at Dunmail and left my car behind and drove up to Keswick in Paul's car. We parked at Bria Rigg where the route joins the Bridleway over the A66.
The weather was good, the sun was out the tops were clear of cloud but the wind was slightly chilly. Setting off we kept a good steady pace and quickly passed under Skiddaw Little Man and up onto Skiddaw Summit in 1 hour 15 Min's. Not stopping we carried on off the summit in a northerly direction to where we crossed the fence (as per the directions on the Bob G map) and then followed a good worn path down and over Hare Crag and to a small bridge where the bridleway track goes to Skiddaw House. The path is still well marked (some posts, and well worn) all the way to Great Calva summit in 1 hour 54mins. The pace wasn't rushed and it felt about right for my Bob G attempt. Again; following the instructions off the Bob G map we followed the fence (again a well worn path) down to the sheep fold and down and over the river Caldew. There was no track for the ascent of Mungrisdale common but once over the summit we picked up a well worn path to take us up on to the ridge and the summit of Blencathra. The descent off Halls ridge was steady and we arrived at Threlkeld in 3 hours 33 min's for a quick break and fuel stop.

We started Leg 2 and the ascent up onto Clough Head. On the run to the Dodds Paul was having trouble with his knee on the downhills, fortunately I had some Ibuprofen which he took. Continuing maybe a little slower than we would have liked I then started to have trouble with my right leg on the descents. It seemed to be seizing up and I felt I could only run in slow motion on the downhills! Once we had made the rest of the summits towards Dollywaggon we decided to carry on down direct to Dunmail, missing out Fairfield and Seat Sandal. My leg was still suffering on the descent to Dunmail. Back to the car in a total run time of 7 hours and 14 minutes.

The total distance was 24 miles with ascent of 9667 feet. A good day out just a shame about us both having some sort of leg trouble and plus Paul was still suffering from a cold. But in all a fantastic day out on the fell.

The photos are- Paul and Me on the Summit of Blencathra and me ascending Stybarrow Dodd
Posted by AndyJ at 15:41

Bloody hell Andy, where do you get these crazy ideas from? I wouldn't even think that what you're attempting was humanly possible! Keep updating us on your progress and give me a call if you need fixing when you've finished!!!

Quality day out on the hill, I thoroughly enjoyed it despite the injuries.